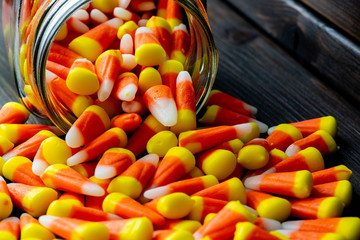 Candy corn became a Halloween tradition when people back in the 1950s began handing out candy to trick-or-treaters. Candy corn was originally referred to as “chicken feed” back in the 1920s and was sold in a box. The name candy corn came about because the majority of its consumers at the time of its invention were mainly in the rural areas and could relate well with Agriculture, it was the company Wunderle candy company that invented the treat in the 1880s, but it was the Jelly belly company originally known as Goelitz confectionery company that mass produced it in the 20th century, though currently the largest manufacturing company of the candy corn is the Brach’s confections which is owned by the Ferrara candy company, which makes about 7 billion candy corn each year.

The key ingredient of the candy corn is actually corn, well corn syrup to be precise. The candy corn’s traditional colors of yellow, orange and white constitute to the colors of the fall harvest, with the yellow end similar to that of corn kernels. There are lots of interesting facts about the candy corn like, The National Confectionery Association has estimated that about 15 metric tons which is about 35 million pounds of candy corn are sold each year, the majority of that number been sold in the Halloween period. The National Confectionery Association has also taken the 30th day of October which is a day before Halloween as the “National candy corn day”.

In addition to the corn syrup, sugar, marshmallow, dextrose, and other ingredients are used to make the candy corns, the process is to cook the ingredients into a slurry in large kettles, and then 45 pounds of warm candy is poured into the buckets, men called stringers would walk in a backwards motion, pouring the candy into trays which are shaped in a kernel form. It took about three passes to ensure that the white, yellow and orange colors appear. Though now the process is still the same, as you could probably guess most of the work is now done by machines.

The candy corn contains about 140 calories in a serving size of 19 pieces, 28 grams of sugar, 70 milligrams of sodium and no fat. The main flavor of the candy corn is sugar, and as far as candy goes is quite practical.

It can also be deep fried, that’s right. This involves rolling in four or five candy corn in a dough and frying them in hot oil, there are various other ways to treat the candy, like a fried candy corn fritters.

The candy corn can also come as a beer. Not everyone is a huge fan of candy corn or even candy in general, so hence the option to drink the Halloween staple as a beer. The candy corn cream ale so it’s called is brewed by the brewing company Westallion brewing company located in Wisconsin. The company claims that the beer is not exactly “sweet nor well balanced” but it most certainly will take you back to your childhood and also give you the feeling that you are as well drinking a beer.