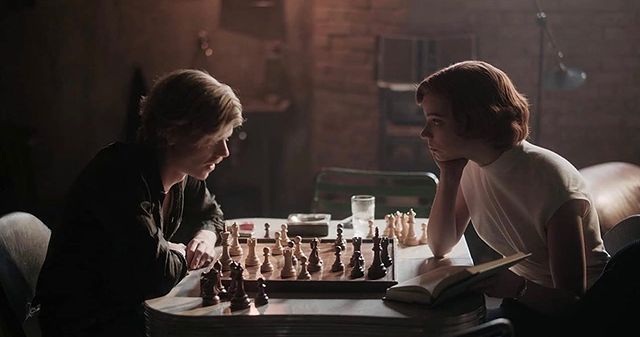 If you have never seen “The Queen’s Gambit”, then you are making a massive mistake. This is one of the most wonderful additions to the screen world in some time, with the story of chess superstar Beth Harmon being very much an enjoyable experience to watch unfold. If you haven’t seen it already, then we recommend you go and watch it first and return. We are going to talk briefly about the ending sequence, and what we believe it means.

So, at the end of it all, Harmon is able to defeat her nemesis, Vasily Borgov, at the major Moscow Invitational event. It’s a major moment for her, overcoming a massive – male – obstacle in her desire to become the top player. The ending shows Harmon avoiding her flight back home to stand amid a series of loving fans in Moscow. There, she stands in a large white coat and hat, making her look very much like the Queen chess piece itself.

Chess, though, has long been used as a form of intelligent symbolism within the world. It’s been a major form of art for a long time, with chess long seen as a means of representing the society it was developed within. In the earliest days of European chess, the structure of the game and its playing pieces were developed as an image of the society that it was formed within. Today, while the pieces remain the same and in some ways outdated, the story of chess is often used to help portray stories of love and conflict.

Indeed, chess was first a game played by that intent on marching to war. It used to carry a range of military units as opposed to members of royalty, and included various units based on the political platform of the era. Instead of a King and Queen, we have the Shah and the Vizier. In the shift to swapping out chariot weapons for things like castles, and soldiers for the classic pawn, chess went from a game of war to a game that reflected society – royalty on top, pawns at the bottom, doing their bidding.

The Queen’s Gambit – the rise of the female

If you go back to the period of time when the queen was first introduced in place of the Vizier, it was seen as a go-ahead to create many allegories around the sport mostly built around the concept of mating, sex, and intimacy.

At the end of the scene, we see a very specific return to this kind of imagery; a powerful queen, dressed just like the pieces she wins on the table with, standing atop a row of roaring and cheering fans – mostly men – who she knows ‘rules over’ as a chess mastermind.

It’s a brilliant little return to the fact that for centuries we have seen chess used as a way to mirror society and its changes. If you haven’t see it, watch it and see if you notice the incredibly powerful symbolism that is shining through in everything that takes place on-screen. It truly is magical.

[AM1]This article was pretty specific and it’s quite tough to use its points without just basically saying the same thing…have tried to balance it out as best I can, mate!