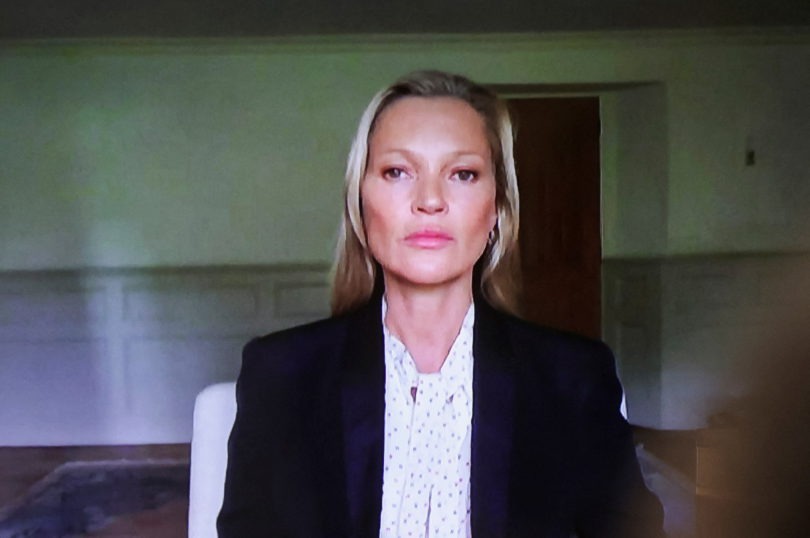 The 48-year-old British Model looked flawless as ever during the most hyped up trial of Johnny Depp vs. Amber Heard. But was it just a choice of fashion, or did the outfit she wore imply something more?

When the news about Kate Moss testifying on her ex-boyfriend, Johnny Depp, behalf came out, everyone was ecstatic. She was called as a witness to confirm whether or not she was pushed down the stairs by Johnny Depp while they were dating and on vacation, to which she confirmed that she was not and only fell because her feet slipped.

Since she’s a well know supermodel whose chic fashion has been appreciated and rightfully so, a lot of people wondered about what she’s going to wear for the trial. Back when she and Depp were together in the late 90s, they were known to be one of the most stylish couples ever. However, Moss changed up her whole look for the court, going for a much more elegant vibe, and according to the experts, it was a smart decision.

Moss wasn’t able to fly down to Virginia where Depp’s 100 million dollars defamation case against Amber Heard was taking place as she was busy in London at that point; thus, she testified online through a video call. Her testimony lasted for just a few minutes, and while she answered the questions asked, it was hard not to notice the beautiful white polka dot pussy-bow blouse she wore with a jacket on top.

A lot of style experts stated that her court look brought more authenticity to her testimony. For many people, it may seem like it was the perfect court outfit due to the simplicity, but a pussy-bow blouse holds much more significance than that. Historically, pussy-bow blouses grew in popularity during Margaret Thatcher’s era, and it quickly became her signature look. Soon, a lot of women during those time started wearing this type of shirt to show authority and the need for equality in workplaces. This silk blouse became a version of a suit and tie, which showed femininity and power.

The untied pussy-bow blouse worn by Kate during the trial gave a soft look, making her seem casual and effortless. She opted to leave the shirt untied to not come off as trying too hard. Apart from her clothes, her makeup and hair were pretty simple and natural looking even though done by a professional. The YSL tuxedo jacket that cost about 2990 dollars also gave the vibe of professionalism, showing the world that she’s here for business and not just performing.

No matter what the outfit is, Kate Moss always manages to look magnificent. So, whether her outfit choice for the court had an underlying hint of strength or not, it definitely caught the eye of a lot of people. So, it won’t be surprising if the pussy-bow blouse is what you see trending in the top fashion trends these days. It’s the perfect way to own your femininity and shows you’re the boss.